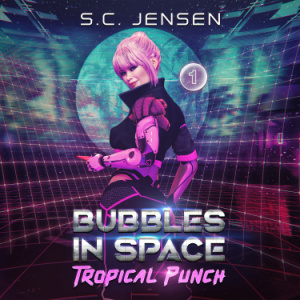 Strippers, Drugs, and Headless Corpses… All in a day’s work for Bubbles Marlowe, HoloCity’s only cyborg detective. What do an anti-tech cult, a deadly new street drug, and the corrupt Chief of Police have in common? It’s a question Bubbles can’t afford to ask. Last time she got curious it cost her job, a limb, and almost her life. She vows to stay out of police business. But with a newly minted cybernetic enhancement, a semi-legal P.I. license, and a knack for asking the wrong kind of questions… Vows are made to be broken, right? When a seemingly straightforward contract takes a dark turn, heads literally roll. Unless she wants to take the fall for the murders Bubbles needs to cut town on the double. Too bad she’s flat broke. And now, she’s being hunted. In a world where dreams can be made real for the right kind of dough, nothing is as it seems. One thing is clear, though. The dream is becoming a nightmare. As the body count stacks up, Bubbles realizes she’s made a terrible mistake. Can she figure out who is behind the murders before she loses her head? Warning: Don’t read this book if you hate fun, glitter, sassy robotic pigs, or hard-boiled badassery. Raymond Chandler and Dashiell Hammett are rolling in their graves, but this is all their fault. 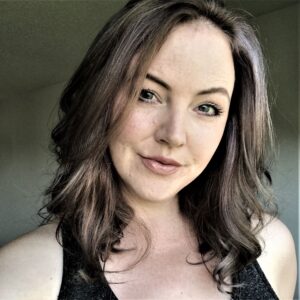 S.C. Jensen is a Canadian fiction writer, sci-fi enthusiast, and literary advocate. She lives on the windswept prairies with her husband, three children, and various fuzzy friends. When she’s not writing, she can be found trying to avoid mosquitoes, sunburn, and/or frostbite in the great outdoors. She loves to talk about books almost as much as she loves writing them, and is often chatting away on bookstagram @scjensen.author when she should be working. Shhh. Don’t tell her kids that’s what she does in the office all day. Visit http://www.scjensen.com to see what S.C. Jensen is up to. Sign up to the VIP Reader’s Club to get free books and special deals on new releases! 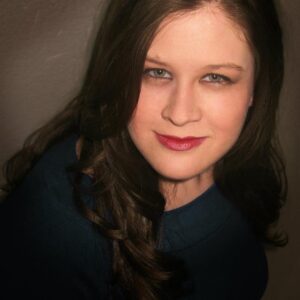 I am an audiobook narrator and actor living in New York. I have a varied background in many fields but found my passion in the creative pursuits. I have been a junior software engineer, a technical support specialist, and am involved in theater both on and offstage. I am also a singer and love playing my Ukulele. I have studied 3d animation, game design, true crime and forensic psychology, you know, for fun. I love knowing about how the world works at a deeper level. Besides narrating, I also run Reaping Audiobooks where I lead an all female crew in the task of post production on audiobooks. I also coach others in the art of using Reaper and efficiency in general. I love helping people find the magic and joy in technology again.